The Art of Facilitation in Detroit 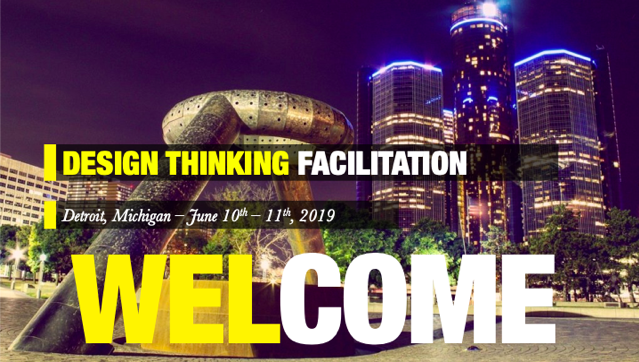 Facilitation is the art of guiding people through a process to extract an outcome that encourages inclusion, participation, collaboration, ownership and creativity. – Terri Burch, DTG Senior Facilitator.

The Art of Facilitation

Facilitation can make or break the outcomes of a meeting, training, or strategy session. This is why one of DesignThinkers Academy’s most popular courses is design thinking facilitation. One of the biggest challenges with design thinking is often not an issue of whether the methodology really works, but rather not having the right tools and most importantly the right facilitation skill sets to achieve a desired outcome.

This past June 10th and 11th, the DesignThinkers Group (DTG) in Detroit, Terri Burch, senior instructor, hosted its first DT Facilitation course for the city. The training organization partnered with the Detroit Center of Design and Technology to host 20 facilitation professionals and 3 other instructor coaches, Marc Bolick, DTG Managing Director accompanied by senior instructors Ezequiel Williams of Miami and Steve Bosak of Washington DC.

The training event was well attended by organizations including Blue Cross Blue Shield of Michigan, Bose, Abbott Chemical as well as those in design practices and higher education. The rambunctious group of facilitators in training arrived early on Monday morning at 8:30, eager to improve their skills in facilitation and practice the design thinking method. In the facilitation training, the teams will work through a global design challenge together and practice facilitating several rounds of design thinking tools. The training can be complex to run for the leaders as it is a well-planned design process that prepares the facilitators before each round and assigns facilitation opportunities based on the participants self-assessed skill level. The training is fast-paced and intense, but the participants are all made better for the experience and leave with refined skills and increased capacity in design thinking facilitation.

The DTG team get to travel around the world to deliver valuable trainings like the facilitation course. Often times the training team likes to use a design challenge relevant to the region so that locals and visitors could feel more connected to the location and topic while having fun. The design challenge is not the primary focus of the training, but the goal is to allow participants to be engaged enough in the challenge topic to learn the facilitation methods, which is the primary purpose of the training. The topic for Detroit was not the usual manufacturing or automotive related challenge, but this time the team decided to focus on what Detroit was once the greatest known for: Entertainment. The Design Challenge

“How might we reimagine the entertainment scene in Detroit?”

This challenge was most fitting with Detroit’s new entry into becoming a desirable city to visit, like noted in this Thrillist article, 10 Reasons Why Every American Should Visit Detroit. With this challenge, participants were able to imagine or better yet, reimagine what the next level of entertainment might look like for Detroit residents, visitors, and enthusiasts alike. Detroit is a city known for culture, design, and entertainment. It is the birthplace of Motown soul and electronic music and known for signature dance moves like the hustle and jit. Recently, Detroit has appointed a night time economy ambassador, Adrian Tonon to focused on improving the nightlife and relations between business, residents, visitors and local government. Detroit is also the only U.S. UNESCO city of Design known around the world for its gritty culture, leaders design and innovation in areas like manufacturing and architecture and has gained international recognition for its art, museum and theatre districts. With this, participants had a great backdrop to work within and given its past and brighter future outlook, we asked participants to consider what the next level of Detroit entertainment looks like? This was the challenge participants were able to explore over 2-days and they jumped right in.

After a level-setting overview and self assessment on facilitation skills and design thinking knowledge, participants were guided through several rounds of facilitating their small teams using DTG specific tools such as stakeholder mapping, persona development, and journey mapping. The participants also had the opportunity to go out into the city and talk to stakeholders about their entertainment experiences in the city. They learned about Detroit from the locals and was able to develop some key insights. One recurring insight was that while there is a lot to do in Detroit, but the opportunities are often difficult to find. It is said that Detroit is not like Chicago or New York and it doesn’t need to be. You have to date Detroit, get to know it and you’ll find many things to do.

This perspective was confirmed in the findings of the teams. After speaking to potential users, the opportunity become more clear and led to the creation of some pretty cool concepts. The teams drew and mapped out their early ideas by using a storyboard design tool.

One team created an application that would grow with the users interests and make suggestions on what to do. Another focused on the needs of the entertainer and created a Detroit-based platform that would allow entertainers to find gigs and opportunities seamlessly. In either case, the goal of the 2-day training was for the teams to learn more about facilitating design thinking workshops and that was accomplished. After long, energetic days of fun, participants graduated from the course, received their certificates and left excited to take their new learnings back to their organizations and practice.

The Art of Facilitation Takes Practice

Facilitation skills must be developed continuously, no matter what your experience level. It takes practice, a lot of it and seems to never be mastered. Facilitation is an art or even more like magic. According to the authors of the book, Unlocking the Magic of Facilitation, when you’re in the presence of magical facilitation, you’ll experience the following, 1) Time Flies, 2) Everyone stays engaged, and 3) Everyone grows, even the facilitator.

Terri Burch is a passionate Design Strategist, Facilitator, and hybrid-thinker. She enjoys facilitating team collaborations and guiding participants through design processes she curates to help them through their journey of transformative change and growth. Terri is a proud native of Detroit, where she lives and enjoys exploring the city, particularly for activities related to dining, art, and culture. She is also a world-traveler, chocolate-lover, and an avid salsa dancer.